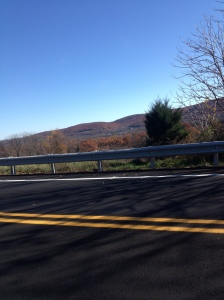 On the first weekend of November, Jay, Patty, Adam and Megan from the Hackettstown store decided to take the usual scenic weekend road ride a little further. OK, a lot further. Why not a 3 day, 190 mile bike tour through the Poconos and Lower Catskills?! I mapped out a route, did some convincing, and we put some slick tires on our cyclocross bikes – Jay bought a fully loaded Jamis Bosanova! – and saddled them up with Bontrager and Thule racks and panniers. The formerly sleek cross racing bikes were transformed into sturdy pack mules, carrying off-the-bike gear, plenty of bars and gels, and enough clothes to prepare for the coldest weekend we’ve had since last winter.

We started our journey on Saturday, north from the Hackettstown shop (our first climb of the day!!), heading northwest through the incredibly scenic rolling hills of Warren and Sussex county. Well, some of the hills weren’t quite so rolling, with 40 pounds of bike and cargo….But the weather was a balmy mid-50’s, and the riding was just perfect.

We stopped for a few photo ops with the locals. They love Hammer bars.

Then we rode through historic Old Mine Rd, ran into a few black bear young’ins, and across the river to Milford, PA. We were headed for Lackawaxen, a tiny river town of 120 people on the forested hills of the Delaware. When our friends in Milford heard we were heading up Rt. 6 out of town, the looks on their faces were enough to almost make us rethink our route. Almost.

After what seemed like a 5 mile climb, we leveled out into the back roads of very rural Twin Lakes, and had only one final road to get to our hotel: German Hill Rd! Just like its name, it was one last angry mountain between us and sleep and food. That was the hill that nearly broke us, as I heard Jay cursing my navigational privileges, I may or may not have walked the last pitch. It all gets a little fuzzy…but the next thing I knew we were on our second round of onion rings and enjoying the “rustic charm” of the Lackawaxen Inn. The locals call it Lack of Action, but it was a great way to end our first day of 70 miles and 6,000+ feet of climbing. I bought Jay a beer to make up for German Hill, and we were still friends.

The next day was cold. Adam is wearing some pretty serious gloves here.

After an awesome breakfast at the outlaw outpost Twin River Junction, we started our route east over the river to NY. 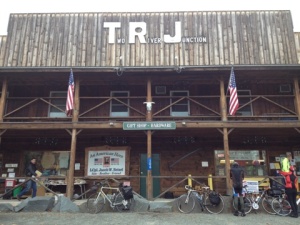 (The waitresses wore cowboy hats, and the coffee was endless. We didn’t want to leave.) 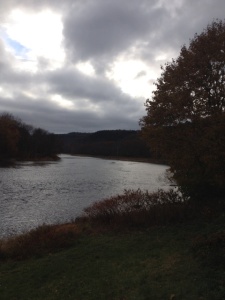 There was a tiny bit of blue sky when we set out (see it in the top left there?) The high temp of the day hovered around 33. Good thing we brought all that extra gear…

The first climb up from the Delaware on Minisink Battleground Rd. was a tough start to the day. We passed through the forested area of Forestburgh (aptly named), winding rural roads through state lands and pine forests. Not much traffic and some amazing views of the fall colors and lakes in this beautiful region of the Catskills. We hit some fun gravel roads through the woods, but no more bear sightings.

Patty’s favorite sign, the Downhill Warning. We had actually just ridden up this one though.

The hills of the day were pretty challenging with the relentless chill in the air and the weight on our bikes, so we were happy to finally end the day at Middletown, NY. We had made our way back to civilization, and after I had a mechanical outside the hotel (!), worked on our route for the next day. 60 miles and over 6,500 feet of climbing had convinced all of us into finding the Path of Least Resistance to get home!

Monday was bright and sunny to start our ride south. Luckily for us, the fields of the Wallkill River valley defined most of the last day. It started out in the 30’s but soon climbed into the upper 40’s, and we had a great tailwind! We crossed into NJ at some point, and wound our way down past Sussex and Hamburg to some more familiar terrain. 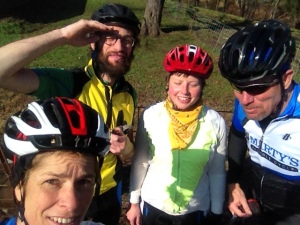 By the end of Day 3 the less hilly roads, sunshine, and the fact that we were almost home had made for some happier faces. We ended at Mattar’s Bistro on the top of Hackettstown mountain (the biggest hill of the day, for the record) with about 60 miles, 4,000 feet of climbing, and one last order of onion rings to celebrate.

This was one of the most fun tours I’ve ever done, and it was  great way to celebrate the end of the warm weather! We had a blast and all agree that a multi-day tour is one of the most exciting and easy ways to take your riding further, and vacation while you’re at it!

Epic Expert Carbon… It’s O.K. if it makes you blush.

When demoing a bike, it’s important to not only look for the hot new features that the manufacturers hype up, but also to just ride the bike the way you ride and on your hometown trails.  Sometimes it’s difficult to ride when you’re thinking about the cool features that your current bike doesn’t have. That is not the case with the Specialized Epic.  Whether you decide to ride either the aluminum or carbon frames, there is no “just get used to it” period.  With the autosag set easily to your weight, you can just get on the bike, ride away, and ride past your buddies or opponents like you’ve got an engine.

This bike is smarter than your middle school honor student.

Climbing: The engineers at Specialized have really dialed in the geometry to make the bike feel comfortable, no matter the pitch of the trail.  With most full  suspension bikes, climbing is done most efficiently by sitting on the nose of the saddle and spinning smoothly up the hill.  With the Brain Shock, there is no need to remain in that position if it doesn’t suit that trail or your riding style.  You can sit and have the bike absorb the bumps while you grab the KOM on your local hill, or you can stand up and mash the cranks without loosing momentum while you cruise past the guy that was faster than you last season.  The best part about the brain is that it is fully adjustable for whatever the trail throws at you. (TL;DR: It climbs like this.)

Descending: I was amazed at how well this bike flew down the hills and ripped corners.  In technical rocky spots, the the brain disengaged and allowed the FSR suspension to suck up all the variations in the terrain.  The biggest aspect of the Brain that I noticed was how predictable it was.  There were no moments where I felt “thrown” because of the suspension, though there were moments I could have sworn I was riding a nimble trail bike through the rocks.  The cornering was perfect since the bike has such a short wheel base even compared to some of it’s 26” rivals.

Models such as the Epic Expert Carbon include a Brain in the fork too!

The gold “clutch” on the derailleur keeps the chain from bouncing up and down, which helps keep the ride quiet and chain on the bike.

Overall the bike is not only gorgeous, but fun and fast to ride.  Whether you are a racer trying to grab a spot on the podium or a recreational rider looking for a fast, comfortable, and fun bike that performs at the highest level, this is the only XC bike you need.  The Specialized Epic comes with a variety of features that will make your ride faster and more fun. By eliminating the third chainring in the front.  The “two by ten” setup (2 gears in the front, 10 in the back) offers an even wider range of options  than with the traditional 3 chainring setup.  S.W.A.T. is another cool feature added to many of the 2014 Specialized fleet.  It offers a nice low-profile tool kit to keep on the bike at all times, and even a chain tool in the stem cap!  Come test ride an Epic today or rent one for the weekend!

ALL HAIL THE BLACK MARKET